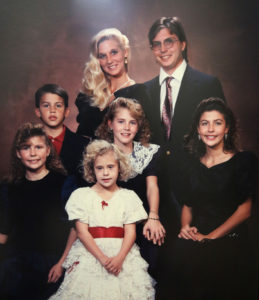 Marcia and I met in the summer of ‘72 when my family moved to Ohio from Philadelphia PA. I couldn’t believe it, I had just moved across the street from the prettiest girl I’ve ever seen. I had four years of high school left to win her heart and it wasn’t going to be easy but I finally did it.

In 1999, we moved to Wooster. We both enjoy horses and always wanted a home that would allow us to keep them on our property. Marcia found the farm and we bought it. After we moved in, we kept several horses in the lower area of the barn. Then after about three years, the bank side of the barn simply fell into the stall area. It was the darnest thing, a big hole in the foundation that you could climb through. We knew that if we didn’t fix the foundation, the barn would eventually collapse. So we moved the horses to a new horse barn behind the house and hired Rudy Christian of Burbank (a nationally recognized barn restoration contractor) to repair the old barn foundation. His crew excavated the entire stone wall foundation, dugout and lowered the barn floor about 2-3 feet, replaced the oak sills on all four sides and then poured four new concrete walls to support the barn. The barn was now safe for another 100-200 years. But what should we do with it?

We decided to continue the restoration process and possibly use it as a future retail business or, if nothing else, a “Man Cave”. Marcia had no interest in using the barn as a Man Cave, so she kept coming up with ideas. One of her ideas was to grow and sell “mums” along with other Fall decorative items. Not really a great idea, but a lot better than a Man Cave. Then one day, our friend and neighbor (Andy Troutman of Troutman’s Vineyard) stopped by to see our progress and suggested that we consider using our newly restored barn as a small winery. Marcia loved the “winery” idea and I was never really sold on the “Man Cave” anyway. So that’s the direction we headed in. We’ve continued selling our mums every Fall with the hope of someday combining the mum and wine sales together. Marcia has sold mums at the Blue Barn for many years now and has formed lasting friendships with hundreds of her customers.

It took several additional years of permitting and careful construction of the restrooms and a kitchen to make the barn presentable as a winery. We were fortunate enough to acquire the property across the road to use for wine manufacturing and equipment storage. Everything was coming together. Years had passed since we first decided to go in this direction and in that time we had both taken many classes at UC Davis in viticulture, enology and wine marketing. Many of the enology classes were online but a few required on-site attendance (especially the lab classes). It got to the point where we could make pretty good wine.

All of our education involved California grown Vinifera grapes, so that’s where we started. Going to UC Davis, CA multiple times gave us an opportunity to locate numerous grape growers that ship their grapes all over the US. In fact, we found that in most years, it’s cheaper to purchase California grown grapes than to grow them ourselves. California has had and hopefully will always have an overabundance of wine grapes to sell to the rest of the US. Ohio winters (especially away from Lake Erie) make it very difficult to grow the French Vinifera grapes used for fine wines. Currently, our wines are made across the road using mostly California-sourced Vinifera grapes. 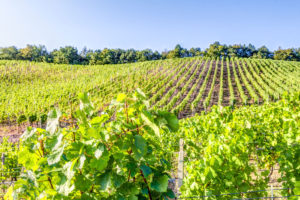 Blue Barn Winery does grow some grapes for wine making in our adjacent vineyard. Our intent was always to grow estate grapes to be used for ice or late harvest wine. For seven years we cultivated and pampered Vidal Blanc vines only to lose them all after the Polar Vortex of 2015. We have replanted the vineyard with Edelweiss grapes which are cold hardy down to -35 F. In another few years we should be able to harvest them for either ice wine or a sweet late harvest wine.

The original house and the barn are both historic structures. We knew that a portion of the house was very old evidenced by the hand-hewn timber frame beams but we didn’t know exactly how old it was. Nick Wiesenburg of Dendrochronology Services in Wooster dated the beams in the basement of the house to 1834. This date matched the earliest date we could find in the Recorder’s Office for our property.

The original barn was probably built around the same time, but it’s no longer standing. The current “Blue Barn” appears to have been built around 1868 based on Recorder’s Office information. Ohio, along with a few other northern states, experienced a significant economic boom following the Civil War. Farmers would display their success by building elaborate barns (not homes). Louvered windows for ventilation, fancy trim and scrolling, and stamped tin roofs all displayed the landowner’s financial success. Ohio and Indiana have some of the best barns ever built in America. The color of our barn is also quite unique. It’s “Union Blue” and signifies the national pride the original owners must have had. It may be the only original “blue barn” still standing. There was no way we were going to let this barn fall apart.

Marcia and I both come from a long line of combat veterans and there’s nothing that makes us more proud than to help preserve America’s great history.

(Our family’s history is a whole other story. Marcia’s family goes back to 17th century New Amsterdam)

Closed for the Season
We'll reopen again on Friday, June 3, 2022